I am often prompted to reflect on why people don’t borrow and remix high quality, open licensed educational content more often than they do.

There are many projects that have created amazing content and licensed it under a Creative Commons license. But the degree to which this content is used and especially remixed is often lower than people expect.

The reasons for this are many — ranging from the culture of some schools that holds instructional materials as sacrosanct to the lack of time and/or expertise to do this work. In addition, the engagement timeline on this kind of work is long, and many projects don’t have the wherewithal to endure that. However, I think another key element is the very nature of instructional materials.

When I think about the thousands of open licensed items I have created and published, two categories stand out to me as having gotten significant uptake in terms of being reused and remixed: Flickr photos and the open dictionary. I am particularly pleased with the fact that I get regular requests to reuse the content in our public domain dictionary. This has been a long term labor of love that we’ve put a lot of time in, and it’s good to see it being used. Unlike Flickr, this is a relatively unknown and unpublicized site, so this speaks to some real need.

Something both these categories of content have in common is a very small level of granularity. Photos and definitions are not only very granular but they are relatively generic and can be used in a wide variety of contexts without a lot of rework.

This contrasts with most instructional materials, which by their very nature are complex and carefully designed, often with spiraling content, interwoven assessments, and a variety of pedagogical features. It is possible that such materials do not lend themselves well to being chopped up and reassembled in new and different ways. And in fact, the history of various designs that leverage chunks or learning objects has not been one of great success.

So is the quest to allow customization through OERs for naught? Or does it make more sense to look at customizing OERs in terms of larger “full course” materials? I’m not sure, and I believe that customization and open learning bring a deeper level of learning. But the fact still remains that uptake on these materials can make it difficult to justify the investment.

What I can say is that if your goal is significant reuse, think granular.

Several conversations lately have made me ponder the importance of community understanding and support for various new initiatives like open learning and OER adoption.

In particular, I was at a meeting with the mayor and city manager of a local community last week. The topic of the meeting wasn’t really education per se, but the conversation quickly moved there as we talked about various challenges the community faces. I was surprised to hear one participant, someone who I view as a progressive and forward thinking person, rail against the lack of textbooks in the schools. This brought agreement from the group and led to a litany of complaints about Common Core and other practices in the local schools.

As a progressive educator, I was shocked — I believe that the use of textbooks and the rigid adherence to pacing and standardization is one of the most troubling aspects of education today. To me, not having textbooks and instead empowering our teachers and students to a greater degree would be one of the best things we could do to advance learning.

Clearly, though, this is not the view of many community members. As we’ve seen with other progressive trends, there is often a negative reaction to methods that are different from what was “good enough for us” when we were in school.

This relates to OER as well. OER, and even more so open learning, look different in the classroom. There are different assumptions, different methodologies, and different intended outcomes. If we don’t acknowledge those, and make sure that the community, as well as teachers and students, understand and support that, we are fighting an uphill battle.

If we are looking at OER as merely a lower cost way to provide the static textbooks that are otherwise in use, we’re missing the real benefit. The opportunity of OER and open learning is to jump forward; to move past textbooks, worksheets, and standardized curriculum; to progress to a place where there is more and deeper learning for everyone. But to get there, we need consensus on that.

In a chat on Twitter, this weekend, Kevin said that our little postcard project was one of the “most connected/enjoyable” CLMOOC activities.

That got me thinking back to the meaning of connected learning and whether this project qualifies.

Here’s my mapping of the CL principles and values to this project.

This may seem like an overly academic analysis of this project. (I mean, the amount of happiness and joy it has inspired has been enough!) However, I am curious about how things like this might be mapped to other learning, and of course, it’s always interesting to to see how theoretical constructs of learning apply to real world experiences. 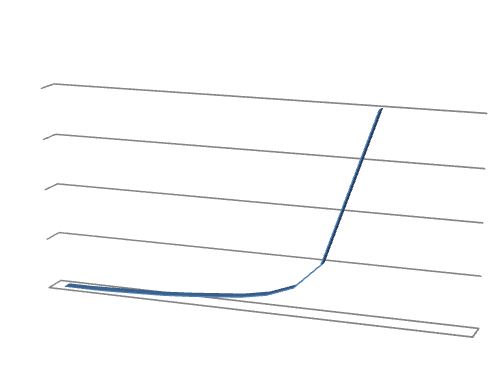 I have written before about the connections between OER and open practice and why I think open practice should be the goal, not merely the adoption of OER.

While I hope and believe that OER can pave the way for open practice, it is not at all obvious that the use of OER is a necessary condition. In fact, some of the most vibrant classroom exemplars of open practice in action that I’ve seen have not involved OER. It is possible to have open practice with proprietary content. While this may skirt the gray edges of copyright law, this has long been the case in education, and most don’t want to talk about it or simply don’t care.

My concern about many efforts to make OER “mainstream” in K-12 education (work that I should say, I have long been supportive of) is that it may not lead to open practice or in the worse case, any meaningful change in practice. It may only lead to the creation of a new variety of the traditional publishing (and learning) paradigm that has not served learners well. (Unlike higher ed, there are no clear economically-motivated buyers in K-12, and while many of us have hoped that OER would present the opportunity for cost savings on curriculum to be used to improve instruction, it is not obvious that this is likely.)

Why then is mainstream OER adoption being emphasized over the change to open practice? The answer is scale.

Simply put, mainstream adoption of OER is scaleable, while a change to open practice is not.

In many initiatives, not only those concerned with OER or other educational innovations, but also those related to other social changes, scale is the goal. The thinking is that if we cannot reach some critical mass of change (10% is often cited as a “tipping point”), the effort is not worth pursuing.

I question though whether scale should be the goal or whether in fact, scale for these kinds of change is even feasible. I first began to question the premise of scale as a goal when I became involved in international development work, an area that Meg Wheatley and Deborah Frieze’s book Walk Out, Walk On eloquently and compellingly explores. Doug Belshaw’s recent post “Caring Doesn’t Scale, and Scale Doesn’t Care” brought this to mind again.

In education, another area where the idea of scale has been targeted less than successfully is with charter schools. The idea, as I understand it, is to provide exemplars of innovative practice that could then be “scaled” across the broader universe of public schools.

The problems with trying to scale innovative practice are many. First, as in the case of charter schools and many other things, there are many necessary preconditions to change (regulations, common values, infrastructure, human resources, political will, etc.), that are not easily put in place. The kind of changes we are talking about here don’t just happen because someone wants them to happen. (In fact, many, perhaps most, want these changes and have worked hard for them, but the huge institutional pull in a different direction is hard to overcome.) Perhaps most fundamentally, meaningful change cannot be imposed from the top down; it must be initiated by those at the grass roots level. As Belshaw says, “it’s difficult to scale almost anything that makes a really profound impact on people’s lives.” As much as we want a recipe approach, a “silver bullet,” that’s just not how deep change is made.

It seems to me that to achieve open practice will involve many years of hard incremental work on various fronts. And I wonder if the effort we put into making non-transformative OER “mainstream” is effort that we are not putting toward what really matters.

As many of you know, I’ve spent much of this year working on a project to explore the adoption and implementation of K-12 core instructional materials and to explore business models for the successful and sustainable publishing of such open educational resource (OER) materials.

I’ve written about some of this work as it’s progressed, and now the final report on this is available.

The report covers state and district adoption processes for K-12 core curriculum, considerations that are important to districts doing adoptions (particularly as it relates to OER publishers), attitudes toward OER, publishers’ perspectives on product and OER, information on business models for OER publishers, and recommendations to those in this market.

I learned a lot in the conversations and research that comprised this work. I am grateful to the Hewlett Foundation and everyone who participated. 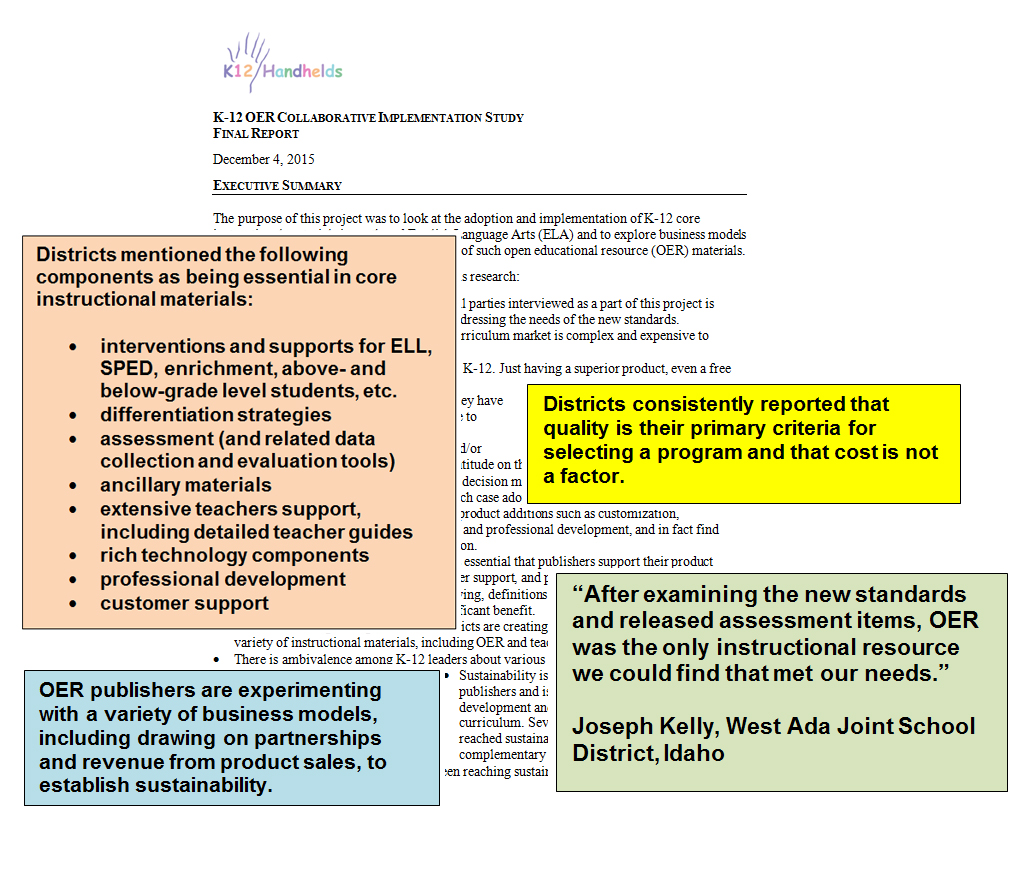