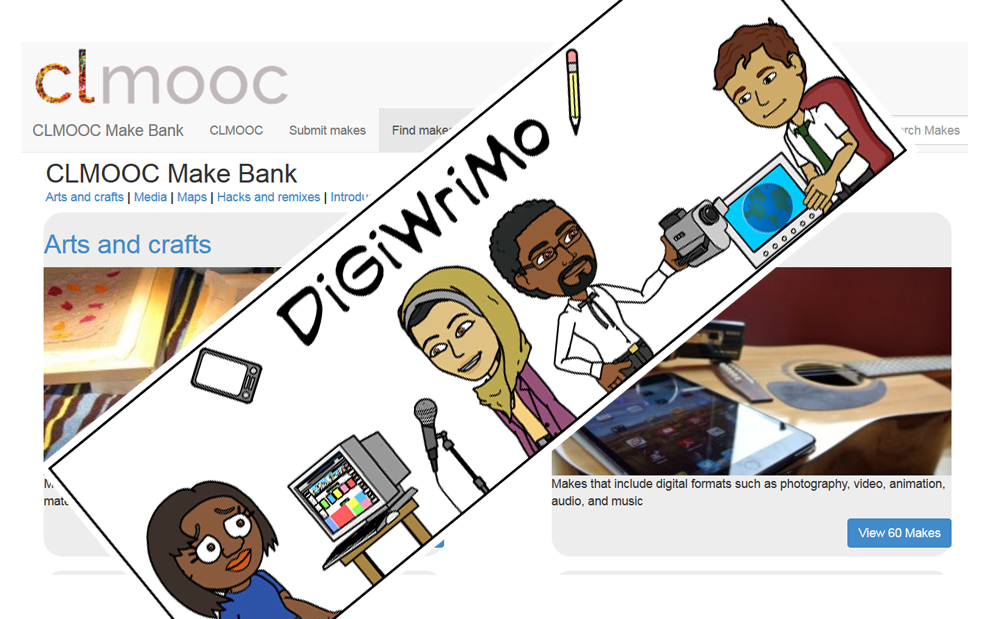 In talking about this with a group of folks last night, someone asked “As a college student working on my elementary major, how could I use this writing piece in my future classroom?” and I immediately thought of the Make Bank.

(For those who aren’t familiar, the Make Bank was a tool we set up as a part of CLMOOC to archive a variety of “makes” or activities, as well as to provide a place for people to post their own work as “examples” and tutorials. The idea of the Make Bank was to make this content readily available to folks for classroom or other use long after events like CLMOOC or DigiWriMo are over. Anyone can add their own “makes” to the bank as well.)

And so DigiWriMo activities will also be added to the Make Bank, starting with the first altCV activity.

You can help by cross-posting your own work as “examples” as well as by adding tutorials. Add your own “makes” too! And please keep this in mind as a resource you can use in your current or future learning environments.

Much of my research to date on the adoption and implementation of K-12 OER core curriculum in ELA and math has led me to the realization that, to schools, price is not a significant factor in adoption. In fact, most don’t even look at price until the adoption decision has been made.

At the same time, OER developers and publishers face the challenge that to complete in state and district adoptions, they need to include many components that add significant cost. These include things like intervention programs, support for many special populations, manipulatives, assessments, pre-sales pilot support (including print materials), professional development, and extensive customer support.

The conclusion I am coming to, therefore, is that OER for core ELA and math will be most broadly used and implemented if it is sold as a package that includes those components. (It’s worth noting that that’s how some of the larger implementations of EngageNY materials have happened.)

Of course, a free, downloadable, open-licensed version would always be available, but the supposition is that that would be used primarily by individual teachers or more progressive schools, for whom “open” is already a practice. (Many of those teachers and schools are already using a variety of materials, creating their own, and remixing with others.)

The OER movement has always maintained that the biggest value of OER is not that it is free in the cost sense, but that it can be modified, remixed, reused, and redistributed. Districts don’t necessarily desire this though, and some actually fear it.

Thinking about the scenario of core OER sold as packaged commercial curriculum, I am forced to ask myself how this differs from any other packaged curriculum? What value does the open license add? Do OER providers in this scenario become just another commercial publishing operation?

I’m not sure I have answers to these questions. I hope that the open license gives some schools and districts the opportunity to move toward more open practice. And if that is successful, the need for such comprehensive, packaged curriculum could eventually disappear. I guess I’m not naive enough to imagine that happening everywhere, but movement in that direction would be an improvement.

[Note: Some of you will see my ongoing struggle with whether OER is integral in some way to open practice, which I see as the bigger win for learning. I realize though that open practice is not a mainstream idea and so am continuing to struggle with this in that context.]

So I was working on a (non education-related) project with a bright young woman today. It involved putting together a short video about her professional work. At the end, she asked me to talk her name off the title because she “tries to keep a low Internet profile.”

Wow, that threw me for a loop.

Without revealing her identity, I can say that this woman is most likely in her late 20-early 30s, has several postgraduate degrees and a very impressive career.

So my unprocessed thoughts, coming in a rapid flow, are something like this: What about building up a positive digital identity?…Well, the idea of keeping a low Internet profile is pretty much a thing of the past, no?…I can’t even imagine trying to keep a low Internet profile…. Did something happen to inspire this fear? (I suspect not.)…What does this situation say about how we provide guidance to younger folks, whether that is as teachers or parents or mentors?…And what does this imply for civil society and participation in general?

I know the whole digital identity conversation has been had a million times, but somehow this situation brought it home to me in a new way.

This also makes me think about how to counsel younger students who are publishing on the open web under our guidance. While some proceed with careful oversight, but a minimal amount of scare tactics or admonitions about the potential dangers, others seem to inspire so much fear as to lack credibility. I suspect there is a happy medium, but I don’t know where that is.

This has serious implications for connected learning, as well as open pedagogy. And it may be just as important for older folks (e.g. teachers) as it is for kids.

How do we impress the importance of privacy and safety without scaring people off from participating at all?

And is this a “real” dilemma or just an imagined one?

As I’ve mentioned, I’m in the midst of a series of interviews with states and districts to explore how they adopt core curriculum and what factors might be especially relevant to those looking to have OER adopted as core curriculum.

I’ve now talked to several state curriculum and instruction leaders, as well as a few districts. Here are some preliminary take-aways.

I am still looking for district superintendents and curriculum leaders to talk to about how they review and adopt core instructional materials and what implementation support they need once they have adopted. Having this information will help publishers better meet your needs, so if you’re interested, drop me a note!

Creative Commons is currently engaged in a project to look at open business models. They’ve put forth this template and have this community to share these ideas.

Since I have been thinking about this as it relates to core curriculum for K-12, I have tried to synthesize some ideas here. 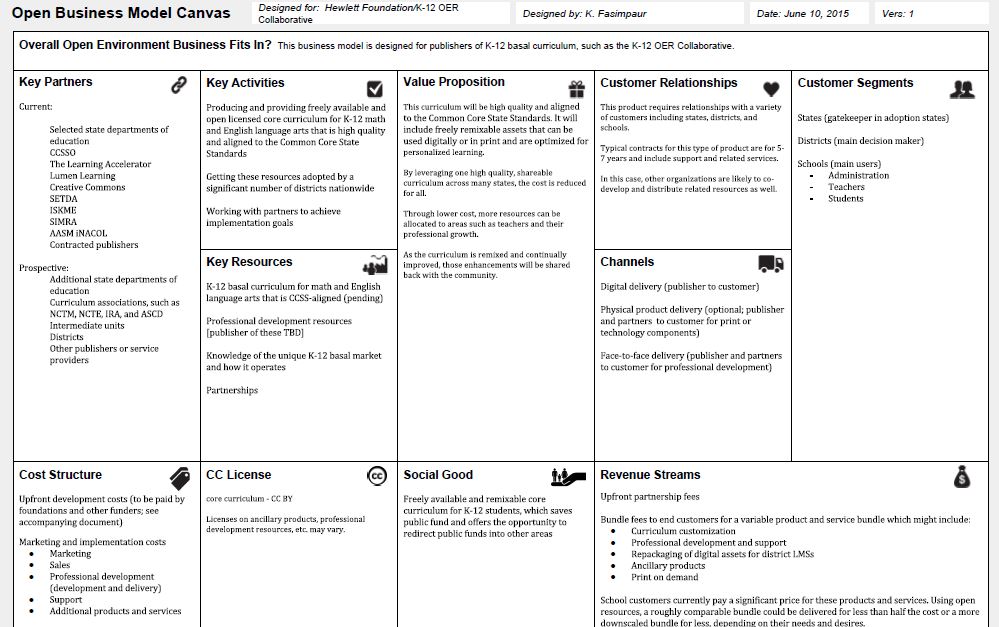 As always, I’d love your input and ideas.

(This concludes this series on business models for OER K-12 core curriculum.)