Last year, in CLMOOC, we launched the first iteration of the Make Bank. Inspired by DS106, we were very enthusiastic about this way to encourage participants to self-direct their learning and to generate and reuse content.

This first iteration of the bank was built in WordPress using Gravity Forms, an approach which I’ve subsequently used successfully in several other projects as well.

Of course, like all projects, by the end of the first year, there was a wish list of new features we had, and a better way to organize and preview the content was high on the list. So when Alan Levine announced the availability of a new WordPress theme implementation of the DS106 assignment bank, we jumped right on it!

The facts that this theme hadn’t been deployed yet, our own technical resources were limited, and time was short caused us (me, really) some trepidation, but we forged ahead.

Now the new Make Bank has been rolled out, and we love it! The advantages we’d hoped for — better organization, a more graphic display, and the ability to add examples and tutorials — all proved to be very beneficial. Just a few weeks into CLMOOC 2014, the community has already added 40 new makes and over 60 new examples and tutorials. To me, that demonstrates the usability of the bank. 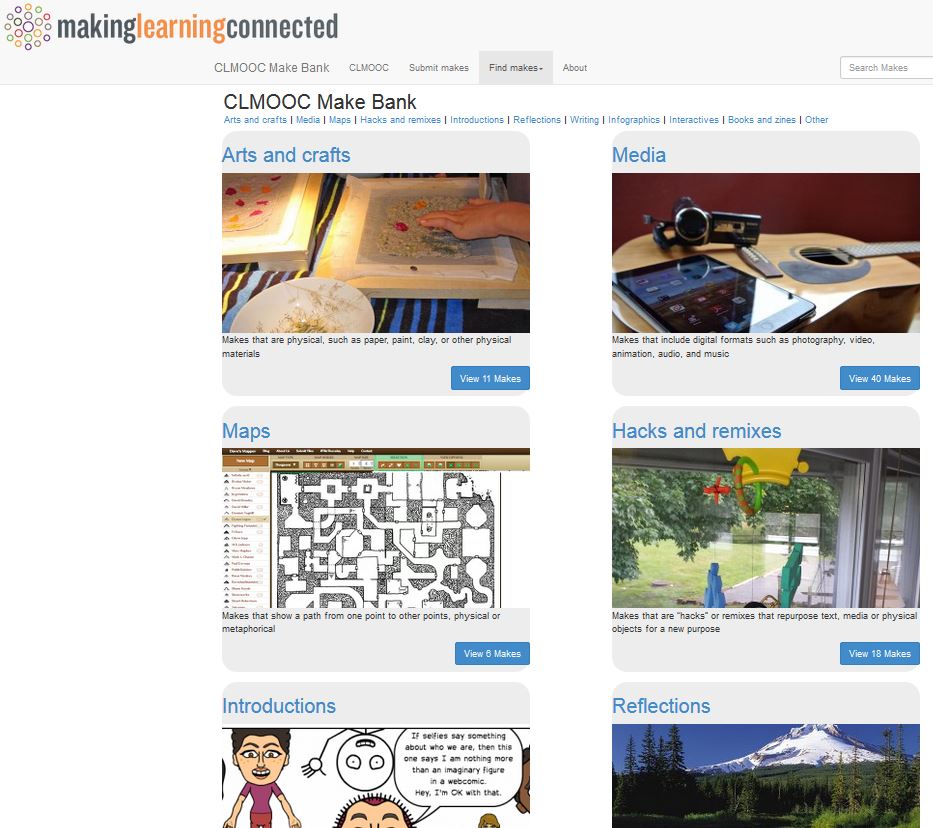 In terms of development, we did some customization to make Alan’s theme do what we wanted. Alan was a great help with this, as the learning curve for us was high and he knows the code intimately since he wrote it. As often happens, our use case wasn’t exactly what was originally envisioned. Some of the things we customized included separating out “difficulty ratings” from general user ratings, adding category sorting, adding tags, adding notifications (we moderate all posts), allowing multiple categories to be selected, displaying the submitter’s name with examples and tutorials, and some bug fixes. Some (most?) of this has been incorporated back into Alan’s build as appropriate.

(Note: For CLMOOC, we did not use the syndication/aggregation features.)

And there are still some additional enhancements we’d like to make, but for now things are sailing smoothly.

For others considering implementing this theme, it is worth considering that as a theme, it requires a separate WordPress installation. This can make it challenging to integrate with other existing WordPress sites. Personally, I think it could be advantageous to implement this functionality as a plug-in rather than a theme, but that’s a project for another day/year….

Much thanks to Alan Levine, Brad Emerson, the National Writing Project, and the CLMOOC community for making this work possible and shareable. I am excited to see what the future brings for our Make Bank.